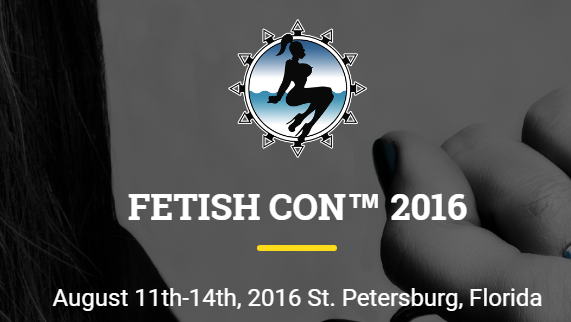 For My 10 year Goddess Anniversary, I attended Fetcon 2016. While I was supposed to be featured in a booth and everything, I am glad that I decided to attend although those plans fell through. I also want to thank those that donated to My fund "Help GoddessChocolate Get to Fetishcon." As you will see from the pictures below, I had a great time and hope to go again.

The Location:  Fetcon is held all the way down in Florida, which means car/bus/air travel, hotel and an out of town trip. Don't misunderstand. I love out of town trips, but all this preparation means, I plan for a whole week, not just a weekend. The rates are a bit more reasonable when you book early. Although, by the time I decided to go, all the rooms at the host location were taken, I was able to find a hotel about 10 minutes away for a decent price. Next time, it would be much better to stay at the host hotel.

The Scene:  This event also gets the whole hotel for the weekend. Since it is Florida, they also have a pool for more wet fetish fun.  While you cannot be naked or show your most private of parts in public areas, they make up for that by allowing many pictures to be taken. That you will see below.

My Objectives:  I attend these events for a number of reasons.  First and foremost, I want to meet those with a foot fetish...My fans, future followers, any and all worshipers.  Anybody who would want to pay to worship Me, who would buy ebony items from Me or who would do things for Me simply to make My life easier.  I am in this to make money and to have fun doing it so that is My main goal when attending these events.

The Photos:  See how much fun I had at Fetishcon. Goddess Chocolate in a Rigger's Rope Goddess Chocolate in a Chastity Belt Posts to Other Goddess Chocolate Events

Posted by GoddessChocolate at 5:49 AM